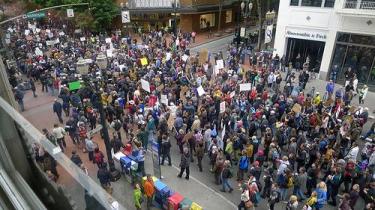 Angry fans of the Green Bay Packers marched in several cities last night and into this morning in protest of their team’s loss to the Tennessee Titans on Sunday.  The largest protest took place in downtown Milwaukee, some one hundred and twenty miles south of the Packers home of Green Bay.

“We’re angry, of course”, said Packers fan and Milwaukee resident Chuck Bauer.  “But just as mad as we are at this terrible loss, us (Green Bay) fans are scared.  I mean, what kind of a world are we going to be living in if the Packers miss the playoffs, or God forbid, finish with a losing record?”

The Titans upset the Packers 47-25 Sunday in Nashville as Marcus Mariotta threw for four touchdowns and the Packers defense surrendered over 450 yards of total offense to the Titans.

“Unacceptable.  I just refuse to accept that loss”, said Green Bay fan Trisha Burch, who was marching in downtown Milwaukee.  “I mean, we never lose to Tennessee, and our defense is way better than how they played on Sunday. I’m not saying for certain that the game was rigged, but it’s definitely possible.”

Burch was one of several protesters who took to the streets of Milwaukee after the game was over, and was still marching into this morning.  Many held signs that read “Not our Packers”, “Not our Loss”, and “Make Green Bay Great Again”.

Asked what he hopes the protests to accomplish, Bauer said “We’ll (march) as long as we have to.  The NFL really needs to re-evaluate the Packers loss, and maybe they can let us play (Tennessee) again or something.  Actually, I really don’t know”.

Tennessee fans celebrated the historic upset win, especially in the team’s home town of Nashville, and were perplexed by the protests.

Titans fan Steve Lockwood was at the game on Sunday and said, “Look, we won fair and square.  If (Packers fans) want to blame anyone, they should be blaming the media.  I mean, nobody gave the Titans a chance to win this game, not Fox, not ESPN, nobody.  I think Green Bay fans and players assumed they were going to win, and then didn’t really show up at game time.”

Burch, for one, vows to continue her protest long into the week.

“I’ll probably keep marching up and down the street, holding my sign and yelling until we get justice”, said Burch.  “Or at least until Tuesday night.  I have to work on Wednesday morning, and then my brother is coming into town, so I’m going to be tied up through the weekend.  But until Tuesday night, I’m so passionate about getting justice for the Packers”.